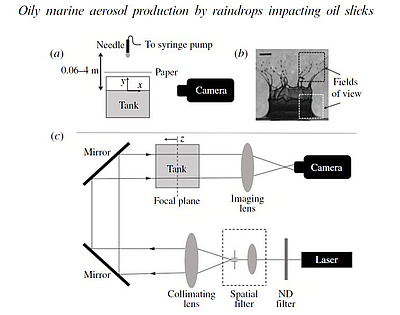 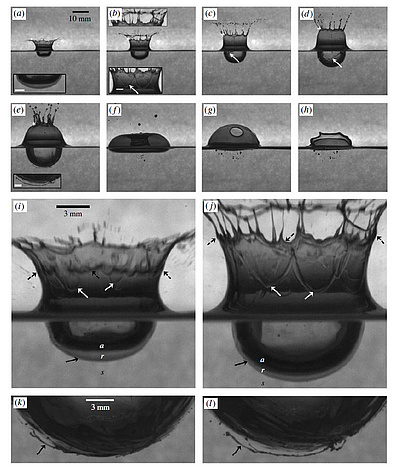 Abstract
The high-speed impact of a droplet on a bulk fluid at high Weber number (We) is not well understood but is relevant to the production of marine aerosol by raindrop impact on the sea surface. These splashes produce a subsurface cavity and a crown which closes into a bubble canopy, but a floating layer of immiscible oil, such as a crude oil slick, alters the splash dynamics. The effects of oil layer fluid properties and thickness, droplet size and impact speed are examined by high-speed visualization. Oil layer rupture and crown behaviour are classified by dimensional scaling. The subsurface cavity volume for impact on thick layers is shown to depend on the Reynolds number (Re), although canopy formation at high Re introduces a competing We effect since rapid canopy closure is found to retard cavity expansion. Time-resolved kinematic measurements show that thin crude oil slicks similarly alter crown closure and cavity growth. The size and spatial distributions of airborne droplets are examined using high-speed holographic microscopy. The droplets have a bimodal distribution with peaks at 50 and 225 mm and are clustered by size at different elevation angles. Small droplets (50 mm) are ejected primarily at shallow angles, indicating production by splashing within the first 100 ms and by breakup of microligaments. Larger droplets (225 mm) are found at steeper elevation angles, indicating later production by capillary instability acting on large ligaments protruding upward from the crown. Intermittent droplet release while the ligaments grow and sweep upward is thought to contribute to the size-dependent spatial ordering. Greater numbers of small droplets are produced at high elevation angles when a crude oil layer is present, indicating satellite droplet formation from ligament breakup. A crude oil layer also increases the target fluid Ohnesorge number, leading to creation of an intact ejecta sheet, which then ruptures to form aerosolized oil droplets.