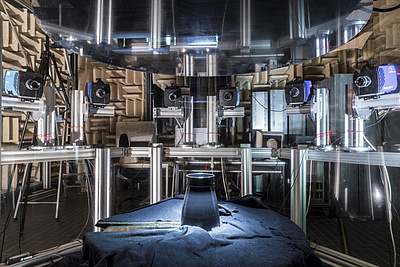 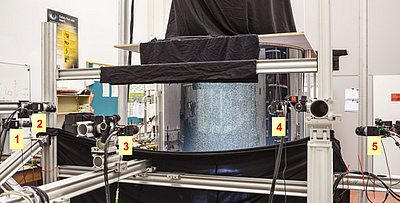 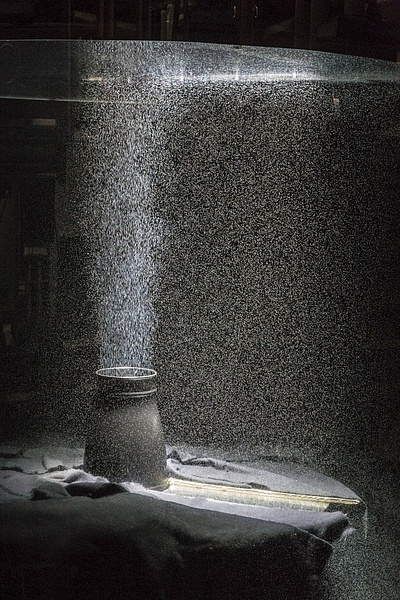 Abstract
We present results from two large-volume volumetric flow experiments. The first of these, investigating a thermal plume at low velocities (up to 0.35 m/s) demonstrates the abilities and requirements to reach volume sizes up to and probably beyond one cubic meter. It is shown that the use of Helium filled soap bubbles (HFSBs) as tracers, combined with pulsed LED illumination yields high particle image quality over large volume depths. A very uniform particle imaging, both in space as well as in time enables using high particle image concentrations (up to 0.1 ppp), while still being able to accurately reconstruct the flow using Shake-The-Box  particle tracking.

The experiment consisted of time-resolved volumetric flow measurements of a convectional plume within a  volume of approx. 0.55 m3 (550 liters). The light yield needed for such a large scale measurement is realized by using HFSBs with 300 !m diameter as tracers and illuminating the measurement region using high-power, scalable arrays of white LEDs. Applying the Shake-The-Box algorithm, up to 275,000 bubbles could be tracked simultaneously. Interpolating the results on a regular grid (using ‘FlowFit’) reveals a multitude of flow structures. The setup can be scaled to larger volumes of several cubic meters, basically only being limited by the number and power of available LEDs and high-resolution cameras with sufficient frame-rate and pixel sizes.

A second experiment showcases the possibilities to reach higher flow velocities, while still measuring within a comparatively large volume, by applying high-speed imaging and advanced LED illumination. An impinging turbulent jet was investigated in volumes ranging from 13 to 47 liters, depending on the repetition rate of the camera system. The results show that even at a repetition rate of 3.9 kHz and flow speeds up to 17 m/s the tested system was able to deliver images that allowed for a reliable and accurate tracking of  bubbles. Again, the use of more LEDs would allow for larger volumes. New generations of high-speed cameras should enable the use of even higher flow speeds – thus enabling large-volume measurements in typical low speed wind tunnel experiments at high spatial resolution (provided enough HFSBs can be produced).